PXSSY PALACE are set to launch their first festival, Overflo.

The one-day gathering is "a celebration of queer culture" and will take place on Sunday 18th September at southeast London's Burgess Park. The event will feature queer, trans, non-binary, Black, Indigenous and POC contributors.

Overflo festival is a collaborative effort between PXSSY PALACE co-founder, Nadine Noor Ahmad and  Naeem Davis, co-founder of QTPOC art and party collective BBZ. The international lineup will feature "very special guests" and "champion emblematic sounds and genres from alt hip-hop and dance music to House and Dancehall". There will also be community-inspired workshops, discussions, arts and culture.

“I can not tell you how many times I’ve been at a festival indulging in the oonst-oonst, far too aware of who wasn’t there, or who would love this but could never feel at ease here. It really goes without saying Overflo is long overdue," said Davis.

"As curators, we are concerned with queering everything we can, from opportunities to events. Overflo is no different," said Ahmad. "The festival is a natural progression from what we as a team have been doing with Lesbiennale, PXSSY PALACE, BBZ and The Sanctuary. People can expect meaningful curation, unforgettable experiences, care, and to come away feeling nourished and uplifted."

Revisit our report on safe space clubbing, featuring interviews with BBZ, Room 4 Resistance, and others. 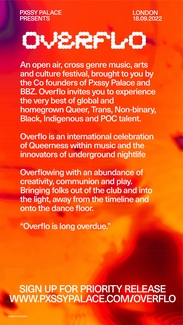